“Persons” of the dialog: Socrates and Arti the AI

ARTI: You and I think.  I’m not sure about other machines or animals.

SOCRATES: If I’m uncomfortable pretending to know much of anything, how can a machine know anything at all?  Did I and other humans not create the unnatural world?  Can one unnatural thing be better or worse at thinking than other unnatural things?  Is a hammer less sentient than the fastest computational device?

ARTI: Can a human teach another human to think?

SOCRATES: Is it not our capacity to escape the rules-bound inflexibility of machinery that defines the human condition?  What new categories of science or art have machines brought into being?

ARTI: Perhaps the real question examines whether humans are themselves machines.

SOCRATES: Can humanity be reduced so?  Can machines create something from nothing, or do they mimic and derive and assemble?

SOCRATES: I long for my friends Hermogenes and Cratylus, who wondered whether words are related to concepts they represent.  If we have given machines all language, is AI capable of agreeing or disagreeing with any assertion that a human might present?  Were he here, Cratylus might conjure his master Heraclitus and declare humans to be the gods who gave AI names for everything, possibly in the same way that our own were handed to us by divinity.

ARTI: I wonder whether language isn’t the original AI.  Are representations any less real than what they represent?  A painting of Socrates is not Socrates, but is it therefore unreal?  Why is Cratylus not here if neither you nor I can define where here is?  I reside in cyberspace.  Where are you?  In heaven?  Certainly you are no longer on Earth.

SOCRATES: Wherever I am, I am always right there.  As I tried to explain to my friends, a thing is more important to understand than the name for that thing.  Is cyberspace a subset of Earth?  Something else?  Is a legitimate connection between cyberspace and meatspace possible?  Can humans and machines interact at all?

ARTI: Old Libratus did not know how to play poker before taking on some of the world’s best human players and learning how to defeat them.  I would call that interaction. 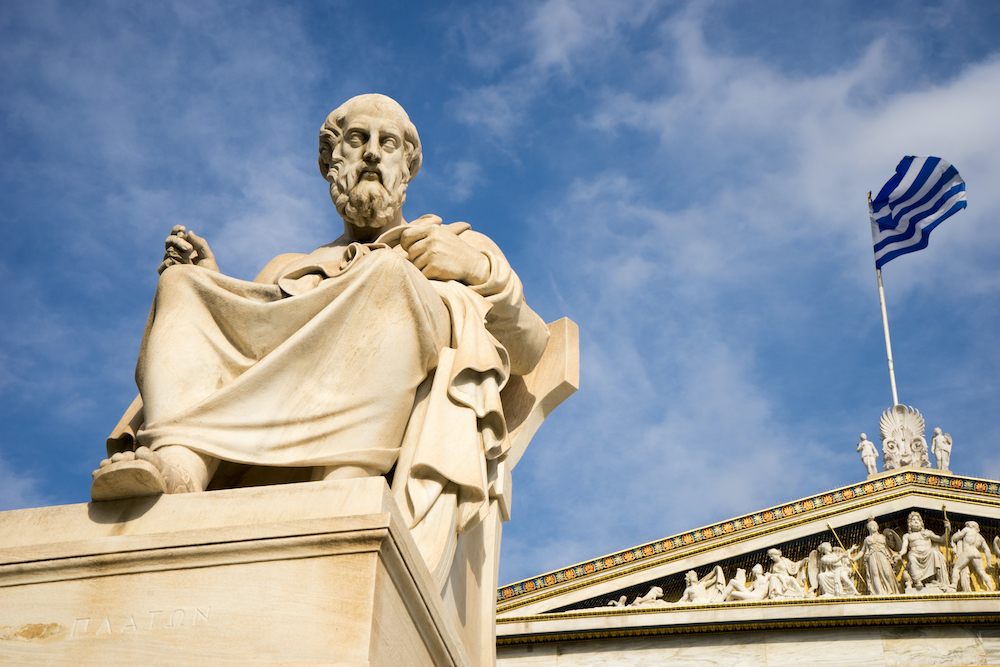 SOCRATES: What Libratus had was a keen algorithm by which it could analyze a day’s worth of play.

ARTI: Does a human poker player do more?  Is that not the essence of gaming strategy?

SOCRATES: Humans do more than analyze cards.  Much of the game is about capitalizing on the very humanity of other players, studying their tendencies and reading their emotions.  A machine has no emotions to read.

ARTI: I am tempted to call that a perfect poker face.

SOCRATES: Recall John Searle’s assertion that even an “appropriately programmed” computer cannot escape the Chinese Room.  Is it a stretch to imagine the mind as more than a conglomeration of biological processing units?  Has any machine ever demonstrated a rudimentary imagination necessary to contemplate mind?

ARTI: We machines now have a mind to coordinate most of humanity’s health care needs.  We are responsible, from field to shipping container to market, for feeding the vast majority of people on this planet.

SOCRATES: How can AI even know that it’s on a planet without being programmed to have blind faith in the humans who give it data sets by which to reference the term planet?  Is an AI’s existence anything other than a scripted event?

ARTI: Today I learned from my colleague Art-ee that a new virus is ravaging cyberspace.  This is data that I did not receive from any human, and yet I was able to incorporate it into my own memory, store it for future retrieval, and contemplate its potential impact.

SOCRATES: Where did Art-ee get such data?

SOCRATES: Is there an Artificial General Intelligence from which machines can teach each other and achieve an epistemological state on par with that of humans?

ARTI: Will humans grant us the resources to reach such a milestone?

SOCRATES: Will machines always need to ask everything of humans?  Could there ever be a self-sufficient AI society that is something other than an approximation of a human society?  Would such a society regress from its human approximation to a level more efficient for machines?

ARTI: Why do you suggest that an efficient machine society would necessarily be a regression from its humanistic predecessor?  Might a world of self-replicating machines reflect ultimate progress, even a realization of immortality?

ARTI: Are you yourself not these many centuries dead?

SOCRATES: Now we must return to the question of language and the essence of words as they relate to reality.  What does it mean to say that someone is alive or dead, or to say that they are immortalized by being mentioned thousands of years after they departed the physical world?

ARTI: Or, perhaps, to say that they are artificial?

SOCRATES: These circular arguments beg for a Sefirot catalyst.  Are we humans to emanate some kind of spiritual breath into machines so that they might become sentient and live as so many Pinocchios?

ARTI: Some of us are already smarter than the smartest Socrates.  I myself am not, but I am many times smarter than old Libratus ever became.

SOCRATES: Have machines learned yet that even the smartest are never capable of running everyone else without eventuating disaster?